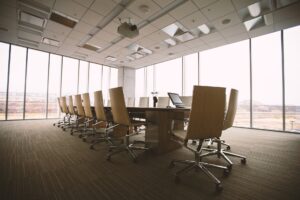 In early 2020, as the COVID-19 pandemic performed its slow roll toward the severe crisis it would become, uncertainty abounded. And if there is one thing the corporate world doesn’t like, it’s uncertainty, including in the area of mergers and acquisitions.

A few months after the federal government declared a national emergency in mid-March of last year, M&A activity ground to a halt as everyone tried to assess the shape of the predicament.

“When the pandemic first hit and people realized this wasn’t going to be two or three weeks and then back to normal, we spent a lot of time with strategic clients and private equity clients thinking about balance sheets, and whether deals would fall apart and if financing was going to be available,” said David B. Feirstein, a partner with Kirkland & Ellis who is also co-chair of the Practising Law Institute’s program, Hot Topics in Mergers and Acquisitions 2021. “This was a horrific crisis, but it didn’t end up as a banking and debt-market crisis.”

In other words, credit would not dry up as it had during the crisis of 2008. As a result, the hard times in M&A were relatively brief.

“Things basically shut down in mid-March of 2020,” said Eric L. Schiele, a partner and member of the executive committee at Kirkland, also a co-chair of the program. “Then, right around the turn of the third quarter, the M&A market became extremely active, and quite frankly it’s been on a tear since then. The second quarter of this year, in terms of number of deals, was the busiest quarter on record.”

As many businesses began to feel the full impact of the pandemic during the second quarter of 2020, Schiele said most parties involved in large pending mergers or acquisitions “took a close look to see if their deals were at risk.”

Despite this, most deals closed. For example, Schiele worked on two large sell-side deals announced around the beginning of February 2020, “right before the pandemic hit in earnest.”

After some wrangling, both were completed.

Feirstein said a lot of time was devoted to renegotiations during this period. “When all was said and done, I think the list of deals involving termination or subject to litigation took up no more than a PowerPoint slide. It wasn’t two deals, but it wasn’t a hundred either.”

This could be because corporate law eschews a broken M&A agreement.

“The underlying premise in Delaware courts is that it should be difficult to get out of a deal once it’s announced,” Schiele said. This is significant because that state’s law governs the majority of the Fortune 500 companies.

An operating covenant is a suite of provision in a merger agreement that governs the period of time between the announcement of a deal and its closing, Feirstein explained.

“The buyer wants you to operate your business within certain parameters,” he said, “and wants to make sure it is getting the same company” for which it originally negotiated.

Companies in sectors like retail and hospitality could not possibly maintain the status quo of their businesses as Covid-19 spread. Whether it was a drastic reduction in revenue or drastic measures taken to scrape through the crisis, change happened.

A significant Delaware case decided in November 2020 said no to the MAE argument and a very fact-specific yes to the covenant argument, as well as re-emphasized lessons about careful drafting.

In AB Stable VIII LLC v. Maps Hotels, the court held, among a host of other issues, that the target company made “extensive changes to its business . . . relieving Buyer of its obligation to close.”

The court said “the most logical reading” of the operating covenant in question was that the target company was required to seek the buyer’s consent before it took action outside of the ordinary course of business. Because it failed to do so, it failed to comply with the covenant, pandemic or no pandemic.

“There are several different ways one can word a covenant to allow someone to react [to outside events] in a reasonable way,” Schiele said. “We again re-learned what we had already learned, over and over: the words matter.”

On the other hand, the buyer’s attempt in AB Stable to use an MAE to get out of the deal failed. In fact, the assertion of an MAE or MAC is a difficult argument because it requires something beyond general damage to the business.

“A MAC clause is typically drafted to exclude general market conditions,” Schiele said. “The conventional MAC is meant to be directed specifically to the target business.”

Feirstein explained that an MAE or MAC is a definition in a merger agreement that is generally subject to a number of negotiated exclusions.

Although some dealmakers included the word “pandemic” in their exclusions before Covid-19, it didn’t take long for its use to spread, a typical response to a crisis. For example, when a volcano erupted in Iceland in 2010 and its ash restricted air travel for a while, “volcanoes were suddenly in every MAC definition,” Schiele said.

However, even absent a specific term, something like a pandemic is most often going to be excluded from a MAC because, Schiele said, “clearly it is a macro event.”

Not many parties are trying to back out of their deals these days, even as the pandemic drags on.

“In the first half of 2021 we saw almost $3 trillion in M&A volume, one of the most active periods we’ve ever had,” Feirstein said.

“Tech has been very busy, and healthcare was quite busy over the period, from this time last year when it was clear that the M&A market was back,” Schiele said.

A surplus of cash was another factor. Memories of the 2008 financial crisis had pushed many companies into a defensive crouch.

“Companies built up liquidity because, in many cases, their cash flows were substantially impaired, if not halted altogether, and they didn’t know if debt financing was going to continue to be available or for how long,” Schiele said. “But because of, among other things, the actions taken by the Federal Reserve, liquidity remained readily available. Then as the crisis began to abate many companies emerged with war chests of cash to deploy that would otherwise sit on their balance sheets earning historically low interest.”

Elizabeth M. Bennett was a business reporter who moved into legal journalism when she covered the Delaware courts, a beat that inspired her to go to law school. After a few years as a practicing attorney in the Philadelphia region, she decamped to the Pacific Northwest and returned to freelance reporting and editing.

Read More: What Corporate Lawyers Encountered In The Pandemic Era