Her new position is noteworthy for a number of reasons. Duckett and Walgreens’ new CEO Rosalind Brewer, who left Starbucks in March, are the only two Black women currently heading major US corporations.

Duckett is the third African American to serve as CEO of TIAA. The 103-year-old money management firm provides retirement account and other financial services for educators and health care professionals as well as government and non-profit employees. (Its original name was Teachers Insurance and Annuity Association of America.)

A spokesperson for Duckett declined a request for comment.

TIAA was managing $1.1 trillion in assets for more than five million active employees as of year-end 2019, according to Fortune.
Duckett is TIAA’s second consecutive Black chief executive, succeeding Roger W. Ferguson, who announced his retirement in November after 12 years at the helm. The company made history in 1987 when it made Clifton R. Wharton Jr. the first Black Fortune 500 CEO.

“It’s an organization that appreciates the contributions of CEOs that happen to be Black,” said Michael Hyter, president and CEO of the Executive Leadership Council, a non-profit working to increase the number of Black executives in Corporate America. “Their market is a diverse market relative to the people that they serve and have served since the company’s origins.”

Hyter said Duckett is a member of his organization and has been a positive leader throughout her career. “She’s a real person with a passion for the community who happens to be a value creator in the financial space and an extraordinary developer of leaders to boot.” 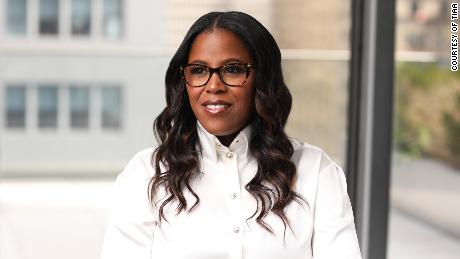 Who is Thasunda Brown Duckett?

Born in Rochester, New York, the 47-year-old married mother of three grew up in Arlington, Texas, before earning a Bachelor’s degree in finance and marketing at the University of Houston in 1996 and an MBA from Baylor University in 2001.

Her financial services career began as an emerging markets vice president at Fannie Mae, where she spent eight years executing strategies to increase Black and Latino homeownership across the country.

“She is passionate about helping communities of color close achievement gaps in wealth creation, educational outcomes and career success,” according to Duckett’s company bio.

Duckett left Fannie Mae in 2004 to join JPMorgan Chase as senior vice president of emerging markets and affordable lending in 2004. Four years later, she was promoted to senior vice president and northeast regional manager of JPMorgan’s home lending division. In 2012, the company made her the national retail sales executive of its mortgage banking team.

A year later, she became CEO of Chase’s auto finance division, managing a team with a portfolio of more than $60 billion in assets. Under her leadership, JPMorgan’s industry-leading auto finance division saw its JD Power Dealer Financing Satisfaction Survey score go from #27 to #1 nationally.

“Thasunda is an extraordinary leader who has completely transformed our Auto Finance business in less than three years,” Chase Consumer and Community Banking CEO Gordon Smith said of Duckett in 2016.

Duckett became CEO of Chase’s consumer banking division the same year, leading a network with more than $600 billion in deposits and 50,000 employees.