Stocks lost ground on Thursday, as investors tried to figure out whether they should be rooting for strong or weak economic data in light of its impact on future decisions from the Federal Reserve on monetary policy. As of 11:15 a.m. EDT, the Dow Jones Industrial Average (DJINDICES:^DJI) was down 221 points to 34,593. The S&P 500 (SNPINDEX:^GSPC) had dropped 29 points to 4,451, and the Nasdaq Composite (NASDAQINDEX:^IXIC) had declined 106 points to 15,056.

With all the huge gains that high-growth tech stocks have delivered over the past year, many investors have stopped paying attention to commodities markets like gold and silver. However, precious metals have made significant moves in recent weeks, and the trend appears to be a lot more negative for investors in those commodities than that market has seen in some time. Below, we’ll look more closely at what’s happening with precious metals today and what it could mean for the rest of the stock market. 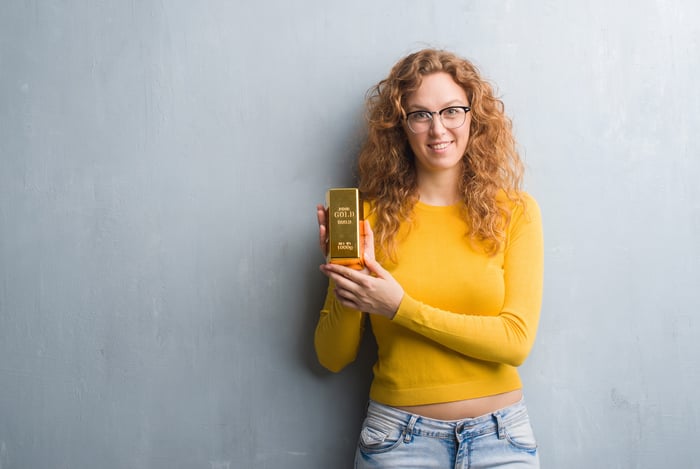 All that glitters is not gold

Palladium was able to buck the trend on Thursday, rising $37 per ounce to $1,972. However, palladium, which along with platinum is used in catalytic converters in the auto industry, remains down more than $600 per ounce in just the past month as nervousness about automotive production and the resulting demand for platinum-group metals weighed on commodities markets.

Most gold investors pointed to recent economic data as driving the move lower in precious metals. Thursday morning, the Commerce Department said that U.S. retail sales had climbed 0.7% in August, defying economists’ forecasts for a similar-sized decline for the month. Core retail sales excluding autos jumped an even stronger 1.8%. That brought the year-over-year rise in the figure to more than 15%.

Those numbers show that consumers remain confident enough about the economy to keep spending. That in turn would give the Federal Reserve more breathing room to raise short-term interest rates in order to keep inflation in check. Precious metals are often seen as a hedge against inflation, so anything that gives the Fed more leeway to fight price increases could hurt prospects for gold and silver investments.

Even after today’s declines, precious metals investments are still at levels well above where they were two to three years ago. If the upward trend in gold and silver prices has truly reversed course, that means investors need to be prepared for substantial moves lower even from these current levels. That in turn could bring a rotation away from struggling gold and silver mining stocks to support higher-growth areas of the market.