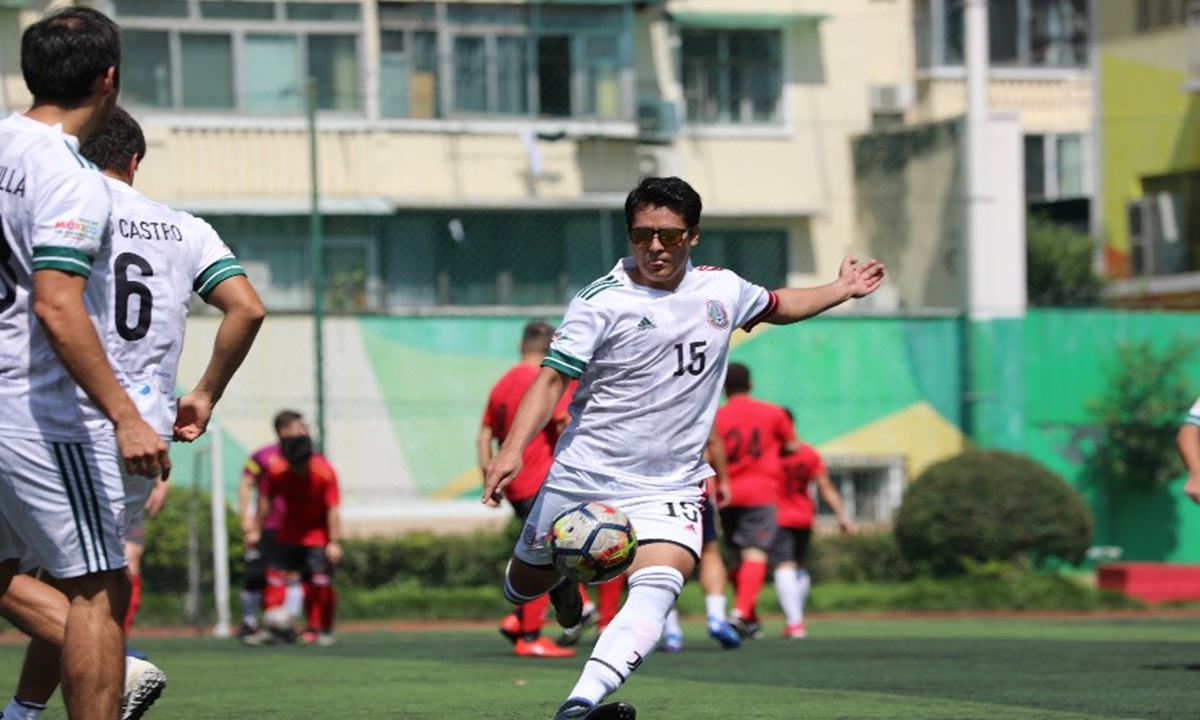 Soccer players at the playground of the stadium in Shanghai on Sunday. Photo: Chen Xia/Global Times

Under the organization of the Consulate General of Mexico in Shanghai, the Mexican communities held two friendly soccer matches on Sunday as part of activities celebrating the Month of Mexico, a series of events for Mexican National Day on September 15, a move to enhance the cultural communication among Chinese and Mexican communities.

Despite Shanghai is still experiencing the heat wave, all the team members arrived at the stadium early and were ready for the competition. Along with them, their family members and friends also came to cheer up for them.

For the female group, Spanish La Macarena FC won Mexican Catrinas FC by 3-0; while for the male group, Shanghai Mexican All Stars FC won against a team from Shanghai Jiao Tong University by 5-2.

Irania Martinez, the Mexican female team leader who has lived in China for about 10 years, told the Global Times on Sunday that compared with the previous year, this year they are able to do sports freely.

“Especially because China is quite safe,” Martinez said, noting that they have the conditions to be able to play again, but in some other countries it’s not possible do sports currently.

Martinez has a full-time job at a Fortune 500 company, but she thought it’s a good way to exchange culture with Chinese via soccer as “Mexico is totally a football country as we have different teams.” If you go to Mexico, you can see kids, adults, everyone playing football, Martinez giggled.

The gathering is also a way for some Chinese people to learn Spanish, since they can interact freely.

Most of the Shanghai Mexican All Stars FC players have been living in Shanghai for 3 to 15 years. Some of them play in different international amateur leagues in the city. Amado Trejo Romero, team leader, told the Global Times on Sunday that the organization to “play exhibition matches” was formed in order to bring people together.

Being an ex-professional player himself, Romero regards sports not only as “a way of cultural exchange” but it also facilitates “community integration.”

We can bring “positive impact” in the exchange among the teams and the communities that are around these teams, because these team members have families and friends who also get involved, Romero noted.

As part of the activities for the Month of Mexico, this year’s event is “much bigger” than last year’s as the epidemic had limited some indoor activities, so they held online activities such as Mexican food cooking classes for the Chinese audience, Lorena Larios Rodriguez, Consul General of Mexico in Shanghai, told the Global Times on Sunday. She added that they all followed the regulations to prevent COVID-19.

Holding the activities “it’s something that touches my heart,” Rodriguez said, noting that they invited everybody, including both the Chinese and Mexican and people from other nationalities to participate in.