These days, an investor can mean a lot of different things when they say the words “tech stock.” After all, technology has become an integral part of competing in every industry throughout our digital world. It’s that very notion that makes me think Accenture (NYSE:ACN), Adobe (NASDAQ:ADBE), and Cognex (NASDAQ:CGNX) are excellent technology companies to own.

Each is helping customers use technology to solve business problems that translate directly to the bottom line. Whether it’s growing sales, optimizing an e-commerce channel, improving productivity and quality, or more. These innovators have you covered. 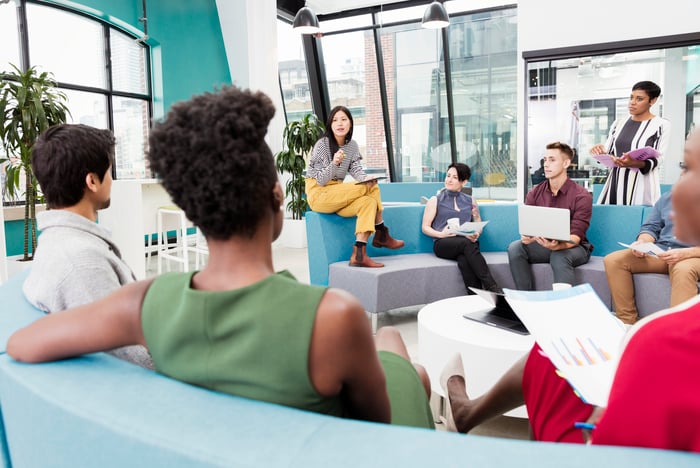 If investors were worried about the impact the global pandemic would have on a business that has historically relied on face-to-face interaction with clients, they needn’t have been. Although sales were only slightly more than flat in 2020, the most recent fiscal year for Accenture — ended in August — showed management was able to more than make up for last year. In fact, the company grew sales nearly as much in the past 12 months as it had in the two fiscal years before the pandemic combined. The performance — more than $50 billion in trailing-12-month revenue — has propelled the stock to a 64% gain since January 2020, outpacing the 40% climb for the S&P 500 index.

The rebound is thanks to Accenture’s broad portfolio of services from cloud and digital transformation to traditional strategy consulting and business process outsourcing. Presenting a one-stop shop for virtually any need a customer might have is how it had 72 clients with more than $100 million in bookings in the trailing 12 months. That was up from 53 the previous year. It’s a testament to the value the company is adding for clients.

That value is largely dependent on the expertise of its people. That’s why it invested 31 million training hours in employees last year and has committed to gender parity by 2025. The company is ranked in the top three of Refinitiv’s Global Diversity and Inclusion Index. A wider range of perspectives leads to better solutions for clients. And the company has ranked at the top of its industry in Fortune‘s most admired companies list for eight consecutive years.

Beyond the accolades, Accenture is immensely profitable — it produces free cash flow at the same rate as Apple — and has essentially no debt. There’s just not a lot for a skeptic to dislike. The combination of the culture, financial performance, and position as the “go-to” partner in a technology-dependent world make Accenture a great stock to buy and hold in any market environment.

Ask any creative professional about the software they use to make their vision a reality and you are likely to hear Adobe mentioned. It’s one of the world’s largest and most diversified software companies with more than $15 billion in sales over the past 12 months.

The company has transitioned much of its business to a more predictable recurring subscription model. In the latest quarter, its three business segments — digital media, creative, and document cloud — accounted for $11.7 billion, $9.9 billion, and $1.8 billion of annualized recurring revenue, respectively. In sum, it’s a 21% increase from the same time last year.

It’s unlikely to slow anytime soon. Analysts expect $15.8 billion in revenue for the full fiscal year. That would represent almost 23% growth — back in line with its pre-pandemic pace. The combination of software considered the de facto standard in creative circles and the rapid growth of the digital economy put Adobe in an almost unassailable position to grow its $300 billion market cap in the years ahead.

Machine vision used to sound like science fiction. Now it’s commonplace for a manufacturing or logistics company to replace humans with the technology to identify, track, measure, or inspect items through their journey from creation to customer. The company serves a market it believes exceeds $4 billion. That gives Cognex and its $983 million in trailing-12-month revenue a roughly 23% share. Management believes it can grow that top line around 12% annually over the long term with an operating margin above 30%.

The company’s business — and those margins — have been erratic over the last few years. But the increase in shipping and logistics due to the pandemic has highlighted Cognex’s operating leverage. Although revenue and operating income have each averaged about 11% growth over the last decade, the pace of top-line growth year to year has an outsize effect on profit — best illustrated by net operating profit after tax. 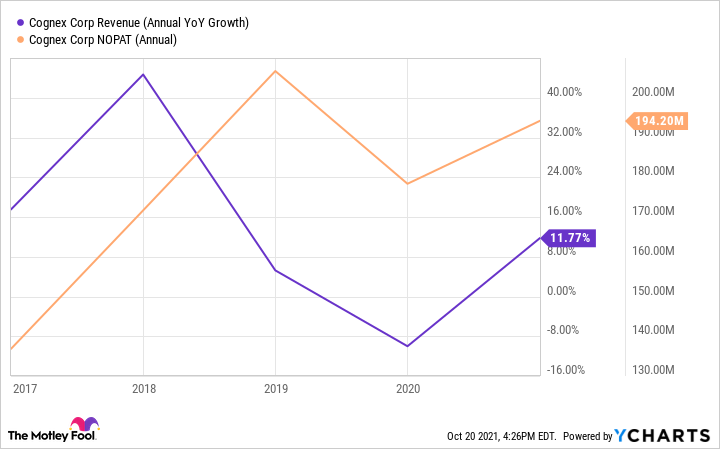 Like many companies, Cognex is dealing with component shortages and supply chain constraints. That said, longer-term, the issues shouldn’t hurt demand. After all, a selling point for machine vision is automating tasks so they can be done faster and more accurately than they could by a person.

Although the nature of its business will make it economically sensitive, the long-term trends are clear. The overall machine vision market is estimated at over $12 billion and growing at roughly 7% each year. That tailwind should offer the company and its shareholders plenty of growth as machines become a larger part of global production and supply chain operations.

Read More: Looking for Tech Stocks? These 3 Are Great Buys | The Motley Fool