The UNLV Lee Business School hosted a Celebration of Life for its benefactor and namesake, Theodore “Ted” Lee on Friday, Sept. 10.

Lee founded the Eureka Casinos in both Las Vegas and Mesquite along with the Urban Land Companies, a family business that developed a number of industrial, retail and multi-family projects in Clark County and the San Francisco Bay area. 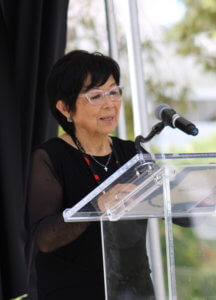 Sandra Lee talks about her brother, Ted, at his Celebration of Life at UNLV on Sept. 10. (Kirk Kern photo)

Sandra Lee talked fondly of her brother’s love of college sports at one of his alma mater, the University of California, Berkeley. She was also responsible for planning family reunions and golf outings in Mesquite.

Hathaway spoke about Lee’s business acumen that led to a successful career in both real estate and gaming despite growing up in an era that wasn’t always very favorable to Asian-Americans.

“He was kind, a visionary, ethical, honorable, tenacious and self-facing,” he said.

In 2011, Lee made a $15 million gift to the UNLV business college, which was renamed in his honor. The gift improved the college’s national reputation to the point where it now has about  3,500 undergraduate students, 500 graduate students and more than 100 faculty and staff. It’s the only accredited business program in Southern Nevada. 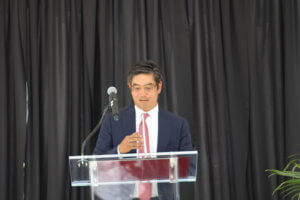 The final speaker was Lee’s son, Greg. Greg talked about his father’s time in the military and how he chose to be a facilities inspector and spent 18 months traveling around Europe.

“The military provided a foundation for success he would rely upon for his entire life,” Greg Lee said.

Lee said his father was all about business, all the time, saying that if you enjoy the type of work you do, it’s easy to work hard. That philosophy even carried over into family vacations.

“We would visit Hawaii,” Greg Lee said. “We would visit old friends, look at new condos and then visit our real estate properties so the trip would be a deduction.”

Greg said his father didn’t really make plans, and got into the casino business almost by happenstance. He said they had a Las Vegas property that became the first Eureka casino in Las Vegas in 1988. When he expanded the small bar into a casino, he talked to the regulars who only asked that he didn’t close the bar.

He listened, and designed the expansion in a way that kept the bar open while construction took place all around.

“The bar was closed for only one day,” Greg Lee said.

That led to his biggest career gamble in his life when, at age 62, he decided to open a 200-room hotel-casino in Mesquite in 1997. At the time, there were three other competing casino entities in town.

Within a year of the Eureka’s opening, one of the casino entities sold out its properties to another group at half of what it’s initial investment was and another casino closed completely.

All the while, Ted continued to walk the casino floor, taking to the customers they had in order to make his property as successful as it could be. He said they liked the fact that the property had wide aisles, the air wasn’t smokey and their were no lines at the restaurants or slot machines.

He had a friend evaluate the business, who said the good news was that his customers liked these attributes about the casinos, but the bad news was it was because he didn’t have enough customers.

But he didn’t give up and the business turned around.

“My dad said you can succeed in business just by staying in business,” Greg Lee said.

The Eureka Resort, which the Lee family sold to its employees in 2015, has been named one of Fortune Magazine’s 100 Best Medium Workplaces and a Great Place to Work-Certified company multiple times.

Lee was preceded in death by his wife of Doris in 2018 and survived by his sons Greg and Ernest, daughters-in-law Dana and Tatiana, and grand-children Graham, Katie, Luke, Harrison, Dylan and Bodie; and siblings Sandra, Clifford, Bob, Felicia and Danford. 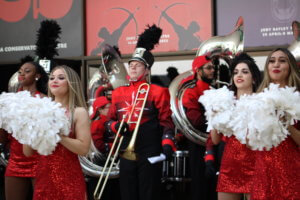 The UNLV marching band was on hand during the Ted Lee Celebration of Life, and they played the Harvard Fight Song in honor of Lee’s alma mater. (Kirk Kern photo)

Read More: Lee honored with Celebration of Life at UNLV