Never Mind the FAANG Stocks, Buy the GHOST Stocks Before 2023

Investors who have been around the block once or twice are no doubt familiar with FAANG, a widely used acronym that represents some of the most successful companies in a generation:

These companies are pioneers, disruptors, and leaders in their respective industries. No platform holds a candle to Facebook when it comes to social media; Apple’s iPhone is unrivaled; Amazon revolutionized digital retail; Netflix has long been the face of streaming video; and Google’s search was so ubiquitous, it became a verb. Investors in these companies have enjoyed the fruits of their dominance, with gains that range from 333% and 2,080% — even after the recent mauling by the bear market.

Yet if each of these disruptors has one thing in common, it’s that the unrivaled growth of the past decade may have peaked. The stock market is a forward-looking mechanism and investors are trying to identify the stocks that will lead the way for the next 10 years. With that in mind, let’s consider the companies of my recently created GHOST acronym, which could lead the way in 2023 and beyond.

Investors have been skittish about the decelerating growth that has plagued online retailers over the past year. It’s more likely that digital sales are simply taking a breather before their next leg higher. The e-commerce market is expected to climb from $3.3 trillion today to $5.4 trillion by 2026, according to Morgan Stanley. Cross-border sales will help fuel that rise, aided by Global-e Online (GLBE -5.97%).

In fact, e-commerce powerhouse Shopify is so convinced of the company’s future success that it owns a 10.2% stake in Global-e online worth more than $373 million, while also making it a strategic partner and exclusive provider of cross-border services for Shopify’s 1.7 million merchants. That’s a heady endorsement from the world’s largest e-commerce platform and purveyor of software-as-a-service (SaaS) tools for digital retail.

Global-e’s third-quarter results quell the notion that the best days of e-commerce have passed. In the third quarter, revenue grew 79% year over year, driven by gross merchandise volume (GMV) soaring 77% higher. The company continues to generate a net loss under generally accepted accounting principles (GAAP), but generates positive operating cash flow, which shows its lack of profits is the result of noncash items including depreciation.

The results suggest Global-e Online has the inside track for the next generation of e-commerce.

No longer confined to its inbound marketing roots, HubSpot (HUBS -1.33%) has expanded its expertise to nearly every facet of customer relationship management (CRM), taking a page from the Salesforce playbook. The company now offers a host of solutions that run the gamut of customer needs, including marketing, sales, service, operations, and a content management system (CMS).

In the third quarter, HubSpot’s total revenue grew 38% year over year in constant currency, while its adjusted net income grew 24%. GAAP profits are still elusive, but the company is profitable on an adjusted basis and generating strong free cash flow, which suggests profits are merely a matter of time.

HubSpot also delivered robust customer growth, up 25% year over year. At the same time, average subscription revenue per customer grew 12% and net revenue retention was 109%. Both were fueled by customers’ continued adoption of multiple products.

It’s also worth mentioning HubSpot’s opportunity continues to grow. Management estimates its current total addressable market (TAM) of $45 billion will climb to $72 billion by 2027. When viewed in the context of its 2021 revenue of $1.3 billion, that helps illustrate the magnitude of the opportunity that remains.

Customer relationship management is a key driver of business success and HubSpot is a leading provider for the next generation of companies. 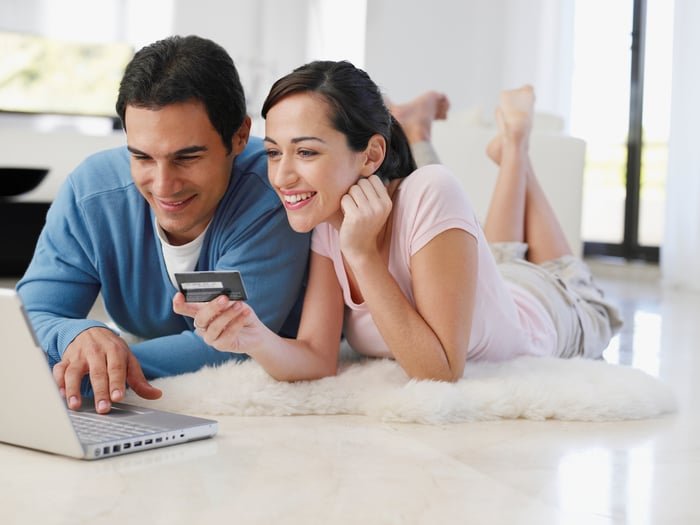 One need only peruse the headlines to understand the importance of preventing unauthorized intrusions. Okta (OKTA -0.09%) has taken the task head-on, upending the genre with cloud-based identity verification and access management solutions. Its platform acts as a frontline of defenses, ensuring employees, customers, and even contractors who access company systems have the necessary credentials. Furthermore, Okta’s zero-trust model is quickly becoming the industry standard, enjoying broad adoption. This helps prevent its customers from making the front page as the latest victim of malicious intrusions.

For the fiscal 2023 first quarter (ended Oct. 31), revenue grew by 37% year over year, while its remaining performance obligation (RPO) — which is made up of unbilled subscription revenue — grew 21%. The current portion of RPO grew 34% year over year, suggesting its future growth will likely be remarkably consistent — an important consideration in challenging times. Furthermore, management said it expects adjusted profits for its 2024 full fiscal year, which begins Feb. 1, 2023.

While Okta initially experienced challenges integrating Auth0, the acquisition appears to have turned the corner, significantly expanding the company’s path for future growth.

Furthermore, Okta has been recognized by both Forrester Research and Gartner as a leader in the field of customer identity and access management.

The need to fortify business systems and prevent hacks, data breaches, and other unauthorized intrusions has never been greater. Okta has proven its worth as a leader in the field.

The digital transformation is ongoing, sending a tsunami of data, applications, and software to the cloud. Unfiltered data gathered in one place could provide leaders with a wealth of information and insight, but the challenge is not only gathering disparate systems and data in one place, but also having the technology to extract meaningful intelligence.

Snowflake (SNOW -0.14%) has the solution. Sure, the company provides the ability to store small or large amounts of data on its cloud-based system. But it also offers a multitude of services that helps companies transition and analyze the data, resulting in actionable information.

In its fiscal 2023 third quarter (ended Oct. 31), revenue grew an impressive 67% year over year, fueled by product revenue that also grew 67%. Perhaps more importantly, Snowflake’s RPO — a leading indicator — climbed 66%, suggesting its robust growth has legs. Losses continue to pile up, but Snowflake generates strong free cash flow, which shows that it’s just a matter of time before the company is solidly profitable.

Snowflake’s customer metrics are equally compelling. Its total customer count grew 34%, but those spending $1 million or more in trailing 12-month revenue grew 94%, showing the value it provides to enterprise-level businesses. Furthermore, existing customers tend to spend more money over time, as evidenced by the company’s net revenue retention rate of 165%.

This is just the start of the digital transformation and Snowflake’s use-based pricing is attracting plenty of next-generation converts.

In tough economic times, one of the first line items in the income statement to take a hit is the advertising budget. As a result, the world’s biggest digital advertisers are suffering. Alphabet’s ad revenue grew just 6% year over year in the third quarter, while Meta Platforms saw revenue decline by 4%.

By comparison, The Trade Desk (TTD -1.35%) — with its cutting-edge programmatic adtech platform — prospered, with revenue that grew 31% year over year, while adjusted earnings per share surged 44%.

Why the difference? The Trade Desk’s platform was designed to cater to the needs of advertisers and the most recent upgrade allows marketers to create ad campaigns that integrate their own first-party customer data — which in turn helps them better reach their target market.

Furthermore, The Trade Desk has built a broad coalition of the world’s biggest advertisers, which are adopting its Unified ID 2.0, the heir-apparent to replace cookies. The system doesn’t use personally identifiable information, a clear win in this age of growing privacy concerns.

Another big attraction for advertisers is The Trade Desk’s transparent pricing. The company shows not only the cost of the ad, but its own cut, something that’s unheard of in the industry. This keeps customers coming back for more as evidenced by its 95% customer retention rate, which has stayed above that rate for more than eight years.

The Trade Desk’s adtech solutions are unrivaled in the advertising industry, which should help the company continue to grow for years to come.

Twins Who Work Together Share Tips for Being Business Partners

Netflix co-founder Reed Hastings to step down as chief executive

Pelosi Says President Biden Should Run for Reelection in 2024

Ukraine Battlefields Look Like World War I, With Terrifying Addition of Drones