2 Reasons Ferrari Is Expensive and Still a Stock to Buy

Savvy investors learned long ago to buy stocks of outstanding companies regardless of the price. That notion helps you avoid trying to time the market, and it also enables you to buy a stock that appears expensive in the event that the price simply continues to rocket higher. Take Tesla, which has made many investors incredibly wealthy and has always appeared expensive according to valuation metrics.

Coincidently, while not the same as Tesla, another automotive stock that appears wildly expensive in the auto industry is still a buy: Ferrari (RACE -1.52%). Here are two reasons it’s worth the valuation.

How expensive is Ferrari?

Before we get to the justification for Ferrari’s lofty valuation, the following chart shows how expensive it is compared to traditional automakers.

If you’re an investor interested in the automotive industry, a simple screening tool would bring up many auto stocks that make Ferrari look exceptionally expensive. But that wouldn’t do the stock justice, and here’s why.

Once upon a time, Ferrari management scoffed at the idea the iconic race and ultra-luxury car maker would dabble in a segment like clunky, oversized SUVs. Until of course, they came to understand they could slap the Ferrari logo on a bigger vehicle and charge even bigger prices. Go figure!

It took some time to come around to the idea of a Ferrari SUV, or to develop a vehicle comparable to “so-called crossovers and SUVs,” in Ferrari’s words. But just last week, the racing icon unveiled the Purosangue. It’s the first ever four-door, four-seater car in Ferrari’s history. And with a V12 engine and a top speed of over 190 mph, it certainly won’t let you forget who made it. 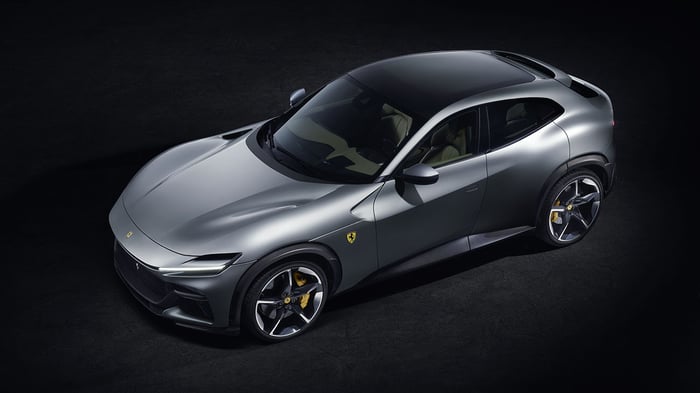 Ferrari’s entry into the SUV market could lure an entirely new super-rich customer, especially considering the staggering price tag of around $390,000. What many investors new to the automotive industry may not realize, is that SUVs and full-size trucks drive a vast majority of profits for traditional automakers.

Only time will tell if Ferrari sees a similar boost in profits, but it stands to reason this new market entry will bring in new customers, give existing customers an additional toy to purchase, enable Ferrari to sell more vehicles as it traditionally keeps a lid on sales for exclusivity and pricing power, and potentially boost margins even further.

And that’s a perfect segue to showing another reason Ferrari justifies its sky-high valuation, compared to traditional automakers: eye popping margins that are still growing.

Leaving competitors in the dust 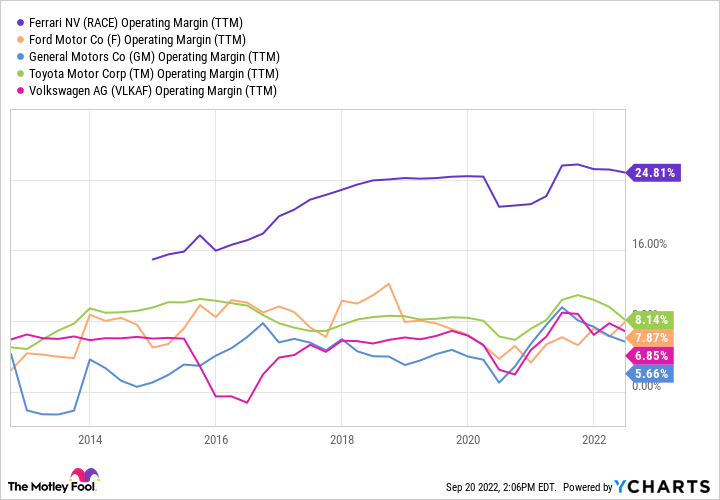 Ferrari doesn’t get enough credit for how impressive its margins are in a hugely capital-intensive manufacturing industry. Even further, in such a developed industry it’s managed to consistently increase its margins compared to the competition.

Essentially, to do this, a company must own a serious competitive advantage through protected or innovative technology. It must elevate its brand and the perceived value of its products, and it must avoid markdowns.

Ferrari accomplishes all of this well as it keeps a lid on its number of sales, doesn’t need to mark down vehicles, and has an impeccable and powerful brand image with decades of racing and ultra-luxury heritage.

Ferrari’s stock is expensive, trading more like a luxury product maker — and that’s how it should be viewed, compared to traditional automakers, even if that context doesn’t show up on your stock screening tool.

Will those margins look even more incredible in the years ahead as the iconic race car maker drives into larger vehicle segments? It’s very possible, and even if that doesn’t materialize, Ferrari is still an expensive stock worth investors’ attention.

Kahoot: faltering edtech investment sends SoftBank to back of the class

Kahoot: faltering edtech investment sends SoftBank to back of the class

US Gas Prices Could Go Below $3 As Oil Slips and Summer Ends: AAA